(One of the first civilization in the eastern Mediterranean)

The city of Susa (in Persian Shoush) in the north of the Persian Gulf in ancient times was adjacent to two important civilizations of Mesopotamia and Elam, and each of these civilizations had a great impact on the culture and civilization of this city. Due to such a history among all the cities of Iran, the city of Susa is known as the "ancient city" and the capital of Iranian civilization. Unfortunately, the natural erosion and the damages caused by the Iran-Iraq war caused a lot of damage to this ancient city.

Many speculations have been made about the name of Shoush (Susa). Some have taken Shoush to mean good, happy and prosperous. Others have said that Shoush means lily flower. The Greeks called this city Susa. Now the name Susa is more popular in English than Shush.

But most likely the Elamites chose the name of Susa in the form of Shushun or Shushan, and this name comes from the name of the Elamite goddess, Inshushinak. Inshushinak was one of the most important goddesses in Elam civilization. She was also a guarding in charge of Susa.2) (2. Inshushinak possibly from Sumerian "lord of Susa") was one of the major gods of the Elamites and the protector deity of Susa. The ziggurat at Choqa Zanbil is dedicated to him. (Sahala, Aleksi: Sumerian phonology, Current state of its study. Part 1: Vowels (p. 4). Academia, updated 11.9.2015. Accessed 23.7.2020.)) 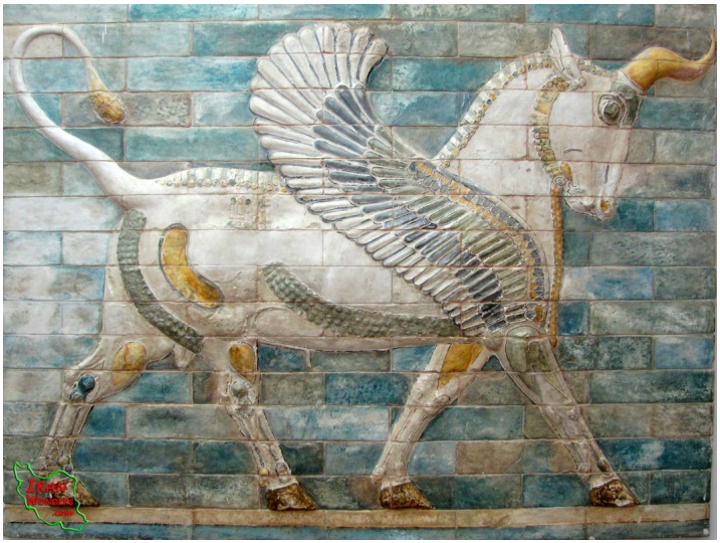 Susa is an ancient city with many hidden secrets and its reputation is known all over the world. Susa was the capital of the most powerful empires in the world. Today, the visitors of the Louvre Museum can see a small part of the ancient art of Susa and ask themselves, "Where is this legendary city located?" Who made such unique works of art? And what was their purpose and message?

In the ancient texts such as Torah and Bible Susa is an important city where great and influential people were living there. The prophet Daniel and the prophet Nehemiah were both apostles from Susa. However, the name Susa is mostly used in the Torah in the story of Ishtar or Astar. 3) (3. Susa is also mentioned in the Ketuvim of the Hebrew Bible by the name Shushan, mainly in Esther, but also once each in Nehemiah and Daniel. (Kriwaczek, Paul. Babylon: Mesopotamia and the Birth of Civilization, St. Martin's Press, 2010, p. 5))

In ancient scriptures, Noah had a son named Shem and Elam was son of Shem and perhaps he was the one who created the Elamite civilization. 4) (4. Elam in the Hebrew Bible (Genesis 10:22, Ezra 4:9) is said to be one of the sons of Shem, the son of Noah. The name is also used (as in Akkadian) for the ancient country of Elam in what is now southern Iran, whose people the Hebrews believed to be the offspring of Elam, son of Shem (Genesis 10:22). This implies that the Elamites were considered Semites by the Hebrews. (Josephus, Flavius (1736). Whiston, A.M., William (ed.). THE WORKS OF JOSEPHUS Complete and Unabridged (1st ed.). Attic Books. pp. book 1, chapter 6, 143.)) In this tradition, the Elamites (or Suziana, meaning the people of Susa) were initially monotheists. But later they distanced themselves from the teachings of Noah and worshiped various gods. From this aspect, the study of Susa can have a profound effect on our understanding of religions today.

The ancient site of Susa is the main attraction for tourists to visit this historical area. Archaeological excavations show that centuries before the birth of the Elamites, Susa was a place of human habitation. These people had settled in Khuzestan (a province in South of Iran) due to sufficient water, warm weather and fertile soil.

Trade was another occupation of the early inhabitants of Susa. As a result, these people gradually became rich and therefore, one of the first imperial dynasties in history arose in Susa. 5) (5. In urban history, Susa is one of the oldest-known settlements of the region. Based on C14 dating, the foundation of a settlement there occurred as early as 4395 BCE (a calibrated radio-carbon date). At this stage it was already very large for the time about 15 hectares. (D. T. Potts, the Archaeology of Elam: Formation and Transformation of an Ancient Iranian State. Cambridge World Archaeology. Cambridge University Press, 2015 pp 58–61)) 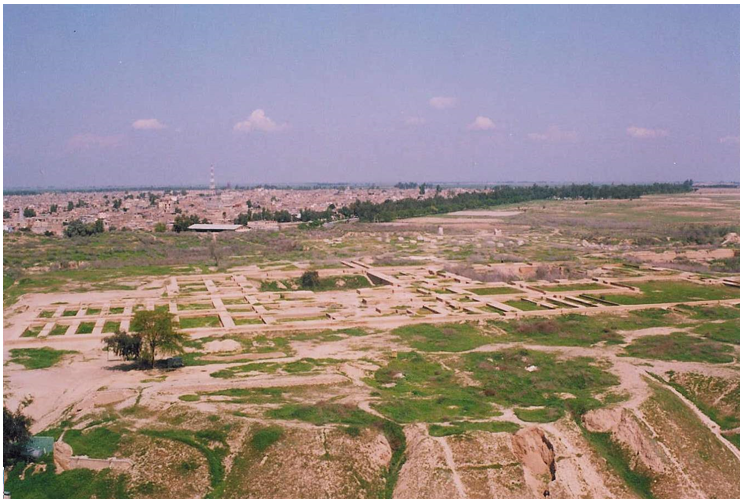 Susa experinced two golden eras in the times which turned the city as a famous city in history.  It was in the time of Schilhak Inshushinak, and the time of King Darius the First in Achaemenid Dynasty. The ancient region of Susa consists of four main parts that narrate the four important elements of ancient Susa:  Acropolis Hill, Apadana Hill, Craft City and Royal City. 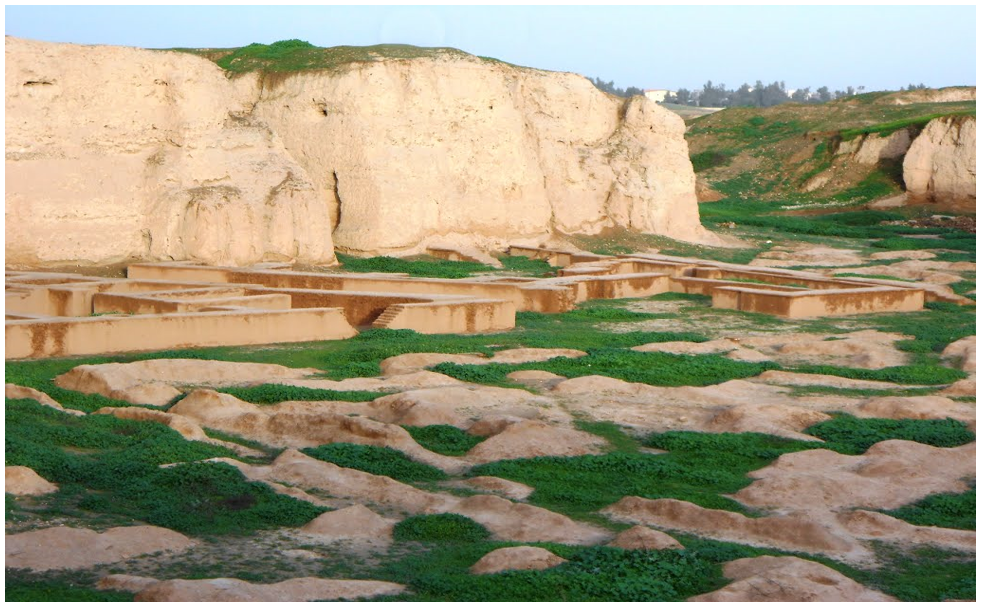 The Acropolis is the highest hill in the ancient region of Susa. The first thing you see on this hill is a large ridge of soil. This bulge is actually an indicator of height. Therefore before the excavation the ancient hill was located at that height .Hence, the depth of drilling can be detected in time of excavation. 6) (6. The highest point of the hills of Susa, namely the “Acropolis”, was selected and a castle in the shape of medieval castles and trapezoids was built on it. (https://toirantour.com/the-ancient-city-of-susa/)) The Acropolis Hill has artifacts from before the Elamite era. But the most important constructions of this hill took place during the time of the Elamites. Excavations show that after the Elamites, this part of the city flourished during the time of the Medes, Achaemenids, Seleucids, Sassanids and the Islamic period before the Mongol invasion. Most of the antiquities of Susa have been discovered on this acropolis hill. 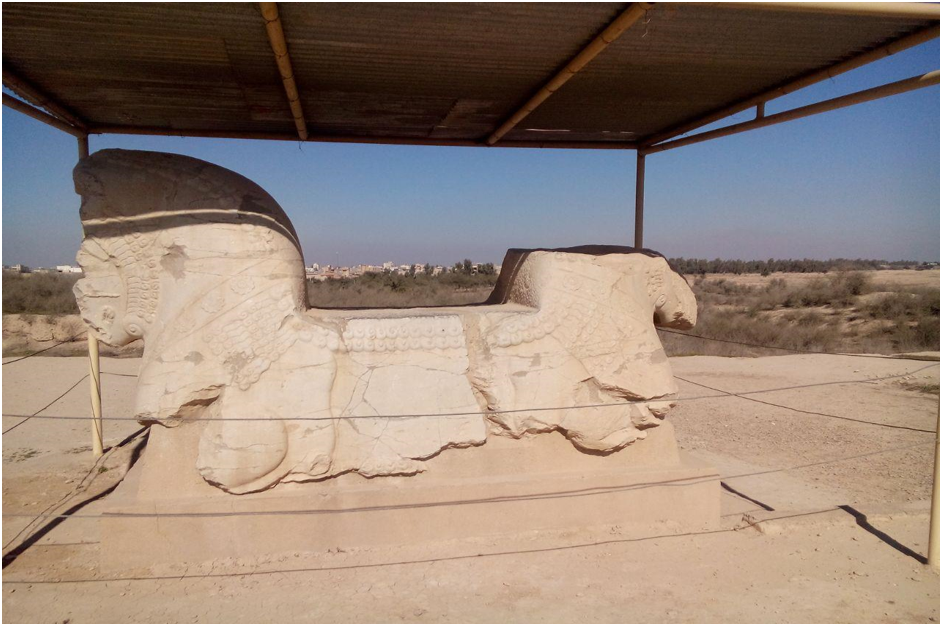 The statue of Napir-Asu is one of the most important ancient discoveries in the world. The statue was found on the Acropolis Hill. Unfortunately, this statue was also stolen from Iran and is now in the Louvre Museum. The statue of the queen is made in real dimensions and in a real way and conveys a lot of information about the dress and culture of the Elamite court. The most substance used for the sculpture (about 1750 kg) is made of copper. There is a layer of bronze on the copper. The third layer, which was made of gold and silver, is not available on the statue today. Napir-Asu was the wife of Untash Napirisha, the maker of Choqa Zanbil . The Louvre is also proud to have the Untash Napirisha column in the Museum. 7) (7. The Archaeology of Elam: Formation and Transformation of an Ancient Iranian State. D.T. Potts, second edition) 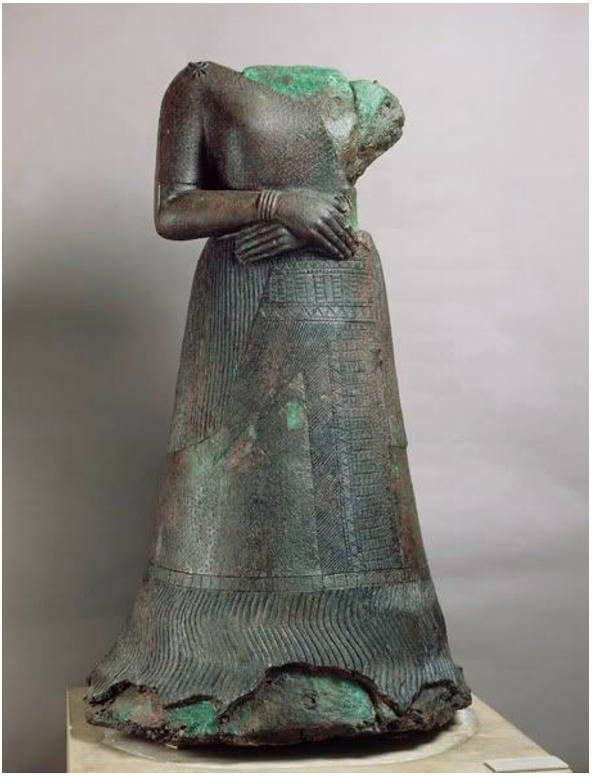 However, having a law is better than not having one. This legal text was written by order of Hammurabi, king of Babylon, on a basalt stone two and a half meters high. Shutruk Nakhonte brought this inscription with him from Babylon to Susa, and it seems that the laws of Hammurabi were also enforced in Susa. 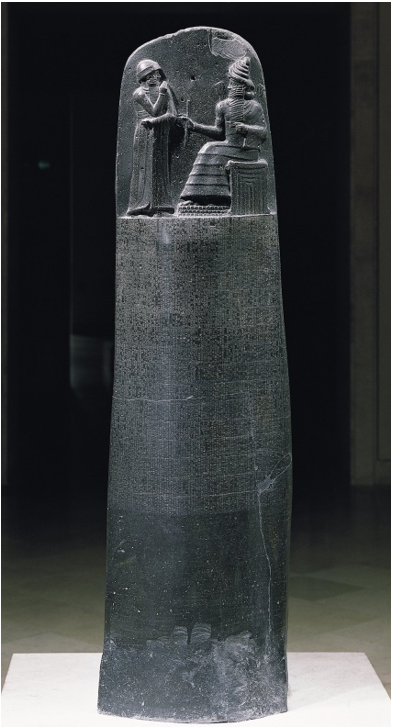 During the reign of king Darius I of Achaemenid Empire, Susa flourished again and returned to its golden age. King Darius I revived the Achaemenid Empire and united the country. Before him, the false Berdia, or Gaumata, had crowned himself and claimed to be the son of Cyrus. Darius, Cyrus' son-in-law, killed him and saved the Achaemenids from extinction. The story is written in the inscription of Biston. King Dariush was very interested in creating inscriptions and wrote various inscriptions such as Ganjnameh inscription in Hamedan and Biston in Kermanshah. Darius also built stone structures. Before him, clay and mud were the main building materials.

Darius built two palaces in Susa and Parseh, both of which had seventy-two stone pillars. It seems that the number 72 was sacred to the Achaemenids. These palaces were called Apadana. People in these palaces could see the king up close and complain or seek judgment. 9) (9.  "SUSA iii. THE ACHAEMENID PERIOD – Encyclopaedia Iranica". iranicaonline.org. Retrieved 2017-07-11.) The pillars of Apadana were circular. The bases were decorated with 12 lotus flowers or lotuses. At the top of these 18-meter columns were large ten-ton capitals in the shape of two horned cows. These mortar-free columns were connected with lead clamps.

The walls of Apadana Palace were beautifully decorated with glazed bricks. The creators of Apadana were inspired by the Ishtar Gate in Babylon to create these arts. Important parts of the Apadana palace caught fire during the reign of Ardashir I (461 BC) and were rebuilt during the reign of Ardashir II (359 BC). Apadana was destroyed in the invasion of Alexander III of Macedon around 320 BC. 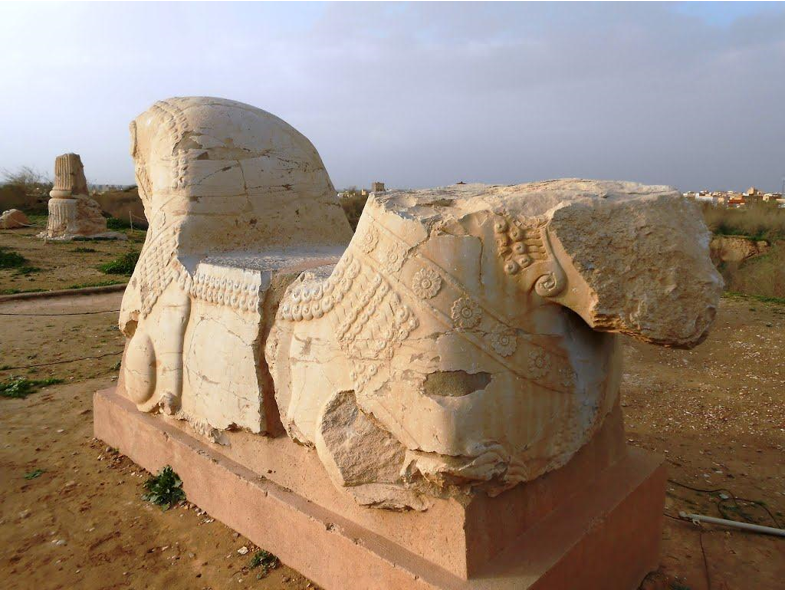 The legendary city of Kabnak

In one theory, Tepti Ahar, the last king of the Kidino dynasty, brought his capital from Susa to Kabnak. He died in the same area and was buried. Kabnak is now known as Haft Tappeh, which has long been an important center of sugar production. The city of Kabnak is mentioned as an important political center during the reign of the Elamite king Tepti-Ahar, the last king of the Kidinuid dynasty ruling in the 15th century BC. He may also have been buried in the city. After his death the center of power returned to the old capital Susa, although there is no clear evidence that Kabnak ever held real power at all. 10) (10. Van De Mieroop, Marc: "A History of the Ancient Near-East, ca. 3000-323 BC", page 185. Blackwell Publishing, 2007)

There is no doubt that Kabnak was one of the important centers of power, politics and wealth in ancient civilization. The unique size of this city shows its importance. A royal tomb has been discovered in Haft Tappeh, which is probably the tomb of Tepti Ahar. This tomb reinforces the theory that Kabnak is the capital. After the extinction of the Kidino dynasty, power returned to Susa. Kings such as Ontash Napirsha and Schilhak Inshushinak came to power after the extinction of Forough Kabnak. 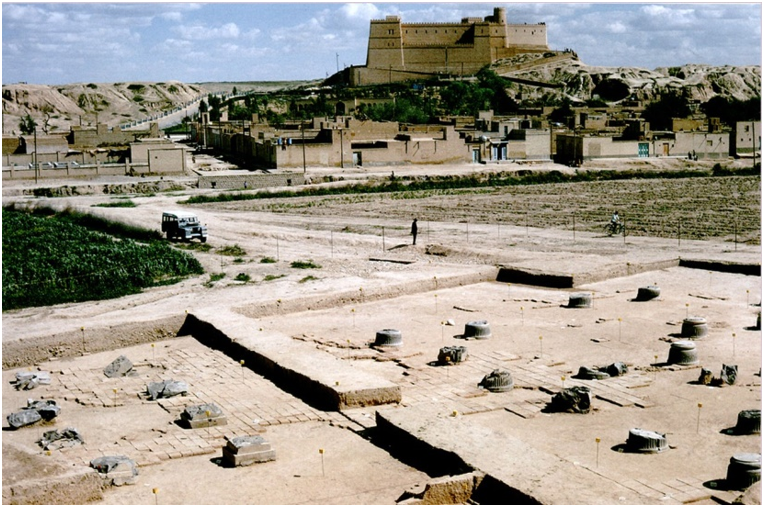 Finally we come to the most important building in Khuzestan and one of the most important buildings in the history of the world. The mysterious ziggurat of Choqa Znabil. Choqa is a Bakhtiari word meaning hill. The Choqa zanbil ziggurat was built during the reign of Ontash Napirasha (Ontash Napirisha). He named this place Dor Ontash, meaning the city of Ontash. Dor Ontash was a temple to one of the most important Elamite deities, Inshushinak. In addition to the main temple, there are 11 other temples for the minor-gods and goddesses in the ziggurat. According to old scriptures, Ontash died before he could build all 22 temples. Royal palaces and tombs for the royal family were also planned in the ziggurat.

Ontash wanted to consolidate power in Susa and Anshan by building a new and comprehensive religious center in his hometown. By his death, the government remained in Susa, but Choqa Zanbil did not remain unused and retained its religious significance for a long time. 11) (11. D. T. Potts, The Archaeology of Elam: Formation and Transformation of an Ancient Iranian State, Cambridge University Press, 1999,)  Choqa Zanbil Ziggurat is the first Iranian site to be inscribed on the UNESCO World Heritage List. This ziggurat is the safest surviving structure from the second millennium BC. 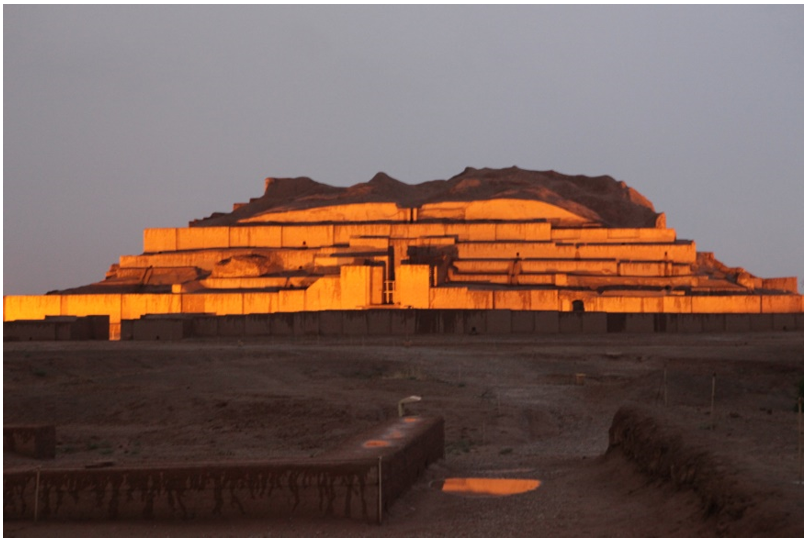 The best time to visit this ancient and historical city is winter and spring, in March and April, the weather in the region is very pleasant.