There is a famous saying in Korean, “뿌리 깊은 나무는 바람에 흔들리지 않는다”, which means 'Deep-rooted tree does not shake in the wind'. The words emphasizes an importance of foundation, and current situation in Halal research would be the perfect example in point. Halal industry has extended its scale and impact even to non-Islamic world, and established business of food-safety by introducing the concept of Halal logistics

The word "Halal" means 'allowed', 'permitted' in Arabic language. With its antonym, "Haram"(prohibited), the concepts have guided overall consumption of Muslims from food to service, medicine, and even act. The size of Halal market has continuously increased, with estimated value of $740 billion by 2025.

However, the problem is that tree of 'Halal' in Korea is shallow-rooted. Majority of Korean research regarding Halal are taking their perspective in economics and business, which causes lack of theoretical foundation. Such biased research trend is especially dangerous when Korea declares to take step into Halal business by establishing their own certificating authority.

Islam is compositive religion with different jurisprudential school. At the same time, Islam is religion of constitution. Islamic religious law, Shariah, is founded upon foundations of absolute Islamic Bible, Qur'an, the narrative of prophet Muhammad, Hadith, and other sources such as customs, etc.

Such feature led to different jurisprudential interpretation of legal sources and make it harder to establish one united standard for Halal certification.

It is no doubt that such 'safety' is obligatory to Muslims, who must follow religious allowance in food consuming. And it is also true that every jurisprudential school has to be considered, which is the reason why the concept of 'integration' drives attention. Integration does not merely mean adding two different opinion, but rather combining perspective of different philosophy in order to find what are best for now. It is not easy to Islamic world especially when Islam is religion of practice.

So far, Malaysia has taken the place of pioneer with leading research and national systemization of Halal certification. Malaysia established 'Department of Islamic Development Malaysia (JAKIM)' in order to deal with domestic and international religious affair including Halal certification from food to healthcare and medication products. The establishment of department was followed by increased need of management to Halal certification in federal level, since the interpretation and its announcement depended on separate schools and their followers, scientific accuracy and validity was controversial.

However, it is important to recognize that JAKIM, or any organization in Islamic world does not re-establish or change the current principle. Principle of jurisprudence is as authoritative as legal sources to Muslims and the role of organization and authority is to announce new Fatwa, the official interpretation that are adaptable to situation.

With growing needs of public, JAKIM systemized the process to certify Halal according to dominant school of thoughts in Malaysia, school of Shafi'i. They analyze the principle and interpretation method of Shafi'i, refer to other school (in Sunni) of thoughts if needed, and make announcement when new Fatwa is founded. 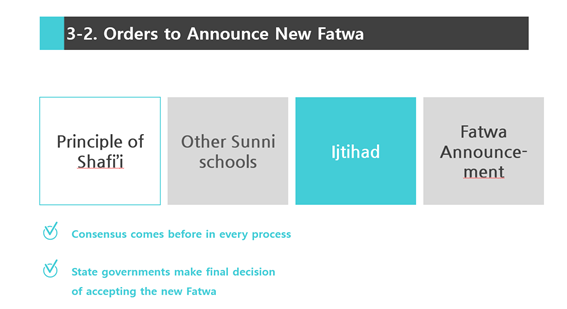 Professionals in field put highlights that modern Islamic world and its authorities are open to accept other schools principle when it is relevant to public benefit. Especially in Malaysia, it is easier to take others considering the country is composed of diverse ethnics and culture.

Based on pluralism that has established on movement to modernize the logics of Islamic law and its cultural diversity, Malaysia pursues to build universal standard of Halal certification, which expects to lead them to international center of distribution and Halal logistics.

Examples mentioned above may not be perfect for every Islamic country and individuals, but it is no doubt that Malaysia has taken meaningful first step to modernize field of traditional Islamic law and integrate it with life of 21st century.

Since Korea recognizes the scale and potential of Halal industry, case of Malaysia can be good module in referring theoretical study of traditional law, process to draw the best consensus, and lead to integration of traditional religion and modern lifestyle. Now it is time for Korea to spread roots, finding solid place to grow firm.