Multiculturalism is the policy of protecting cultural diversity or cultural identities of various people within a unified society (dictionary.com n.d.). It reflects the cultural status of a society. Multiculturalism is one of the most controversial issue in the contemporary politics (John Wiley & Sons 2013). In the last few decades of the twentieth century, with the growing population of minorities, and especially the growing population of Muslim immigrants in Europe, multiculturalism became a major demand. In the late twentieth century, after decades-long failure of Western European in integration or assimilation policies posed a serious challenge to the theory of multicultural politics in the early twenty-first century. Can Western Europe integrate the identity of its growing Muslim population into European culture? (onlinelibrary n.d.)

However, from cultural point of view, countries are not the same. Some are still monoculture and some are bicultural or multicultural, even if they do not accept such a fact. Race, culture, ethnic, language, religion are important cultural elements that shape our identity, majority and minority, ‘we’ and ‘others’. They play effective role in interactions at individual and collective level. Right or wrong, the image that we or government have of other ethnic, cultural, and social groups determines our interactions, and sometimes leads to discrimination and segregation. Government decides what to do with national unity, majority and minorities, and migrants, conflict of interest, harmony and peaceful living, right to participation in public affairs (political, social and cultural), dominant culture and subcultures, quality or discrimination?

Iran's multicultural society is the historical and civilizational heritage of Persia. Praia was the first and longest empire and civilization of the world. Multiculturalism was a prominent feature of this great Persian Empire. Historical and archeological findings show that throughout history different ethnic and cultural groups have lived together in harmony in the Empire. People largely knew how to live in a multicultural society and most of the rulers also knew how to rule over such colorful societies. 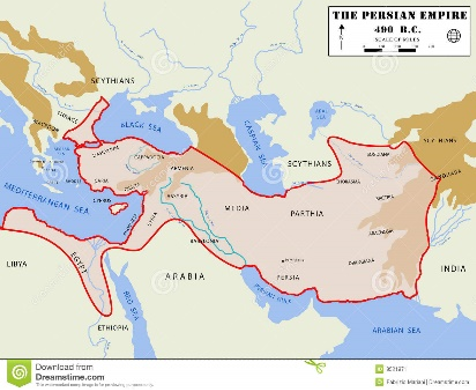 According historians and the Bible, Cyrus was the founder of the world's first multicultural empire. He conquered the region, defeated the Neo-Babylonian Empire, liberated slaves, including the Jews from Babylonian slavery and ordered freedom of religion. Based on the information provided by the British Museum, the Cyrus clay cylinder, “a Babylonian account of the conquest of Babylon by Cyrus in 539 BC, of his restoration to various temples of statues removed by Nabonidus, the previous king of Babylon, and of his own work at Babylon. The cylindrical form is typical of royal inscriptions of the Late Babylonian period, and the text shows that the cylinder was written to be buried in the foundations of the city wall of Babylon. It was deposited there after the capture of the city by Cyrus in 539 BC, and presumably written on his orders. 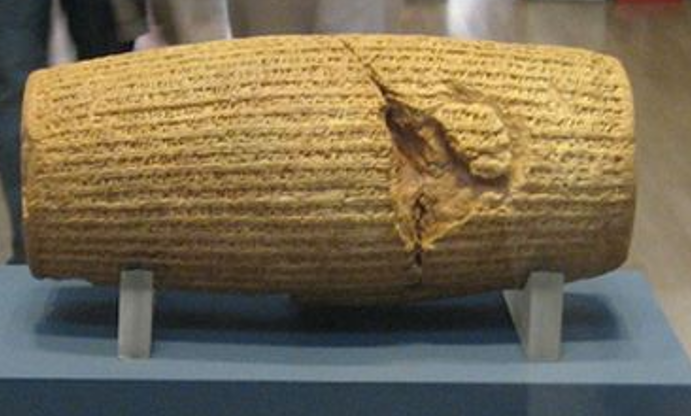 The Cyrus cylinder: clay cylinder; a Babylonian account of the conquest of Babylon by Cyrus in 539 BC, of his restoration to various temples of statues removed by Nabonidus, the previous king of Babylon, and of his own work at Babylon. The cylindrical form is typical of royal inscriptions of the Late Babylonian period, and the text shows that the cylinder was written to be buried in the foundations of the city wall of Babylon. It was deposited there after the capture of the city by Cyrus in 539 BC, and presumably written on his orders.” (Museum n.d.)

The Ancient City of Persepolis, Iran (Symbol of Multicultural Society)

Gate of Nations in the ancient city of Persepolis in Shiraz, Iran is a symbol of the Persian multicultural Empire in ancient time. In New Year ceremony, many delegations of various ethnic groups, from today’s India and Pakistan to Libya, in long queues, with gifts in hands used to climb the steps of the palace and through the Gate of the Nations, enter the building and in a special formal procedure headed for the public meeting hall to visit the king. The images of this unique ceremony is beautifully and artistically depicted on the stones along the steps of the palace. The identities of the delegations can be distinguished from the type of clothing, hats, haircuts and gifts that they have in hand.

From ancient times to the Middle-Ages and until today, different ethnic groups, under an umbrella and unique identity of "Persian culture" have experienced thousands of years of peaceful-living. Contemporary Iran has inherited its multicultural society from such a past. Iran, with her ethnic, linguistic and religious diversity, is a multicultural country. Persians, Arabs, Turks, Kurds, Lors, Baluchis, Turkmens, Armenians with their colorful culture and various languages live together. The most authoritative document that determines a country's official policy on multiculturalism is the constitution. Therefore, here we study the policies of the Iranian government in the constitution of this country.

The constitution of Islamic Republic of Iran recognizes cultural diversity and responds to her ethnic, cultural, language, and religious differences positively.  It is the official policy to protect and preserve the differences within a unified Nation-State. Article 19 of the constitution stated: “All the people of Iran, regardless of ethnic group or tribe, enjoy equal rights; color, race, language and the like do not bestow any privilege.”

a) Policy on the Recognition and Preservation of Cultural Diversity

In addition to legal measures, relevant government agencies promote cultural diversity through music, art, food and clothing festivals.  To get more acquainted with cultural diversity in Iran, here I will share a number of links to the folk music of Iranian ethnic groups so that readers can see the melodies, costumes and to some extent the words of Iranian ethnic groups and have a better understanding of the diversity.

Articles 15-16 of the constitution stated: “The official and common language and script of the people of Iran is Persian. Official documents, correspondence and texts, as well as text-books must be in this language and script. However, the use of regional and tribal languages in the press and mass media, as well as the teaching of their literature in schools alongside Persian is allowed.” Since Arabic is the language of the Quran and Islamic sciences and teachings, and Persian literature is thoroughly permeated with this language, it must be taught, in all classes and in all areas of study, from after the primary level until the end of secondary school.” (Constitution n.d.)

Articles13 -14 of the constitution on Religious Minorities says: “Zoroastrians, Jews, and Christians among Iranians are the only recognized religious minorities and they are free to perform their religious rites and ceremonies within the framework of law and to act in accordance with their own canon in matters of personal law and religious education.” the government of the Islamic Republic of Iran and Muslims have the duty to treat non-Muslims in accordance with ethical norms and Islamic justice and fairness and to observe their human rights. This article applies to those who do not engage in conspiracy and hostile measures against Islam and the Islamic Republic of Iran.

According to Islamic teachings, religious minority is a special concept and Muslims from different sects are not considered religious minorities. Therefore, the Iranian constitution does not recognize Sunni Muslims as a Muslim minority.  However, Article 11 of the constitution says:  “It is the duty of the government of the Islamic Republic of Iran to formulate its general policies on the basis of the alliance and unity of Muslim nations (Both Shia and Sunni).”

A Church in Tehran

A Jewish Synagogue in Tehran

As Marshall McLuhan explained in his book, War and Peace in the Global Village (1968). We live in a Global Room, connected so much, that even parents are worried about their children in their bedroom. Everyone is available at anytime and anywhere. News and events and the stances of politicians in the blink of an eye have tremendous effects on the most remote parts of the world. In such a world, nations need to become more familiar with other cultures and increase their tolerance. Since ancient times Iran has been a multicultural country and is officially committed to pursuing a policy of multicultural recognition and protection. This article only attempts to introduce the multicultural society of Iran and its official policies. To examine the details of its practices is another issue that requires more detailed work.