IMS City _ A Visit to Hurghada of Egypt > City

A Visit to Hurghada of Egypt 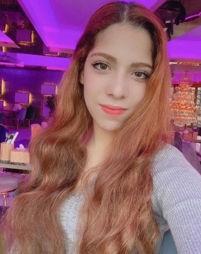 Hurghada is one of the most beautiful Egyptian city that I had recently visited last February. As an Egyptian living abroad this visit impressed me with many things about my country, Egypt.  In this article, I want people to know that aside from the amazing history, culture and the pyramids in Egypt, Egypt has a numerous water activities along the Red Sea and we’ve got the beautiful desert that you can enjoy doing safari, sand boarding and other joyful atmosphere through which you can feel beautiful Arabian nights. So there is a whole lot of diversity in the country that can be understood seeing Egypt’s location in North Africa while it has also a part in Asia (Sinai Peninsula), so we can say that Egypt connects the 2 continent. 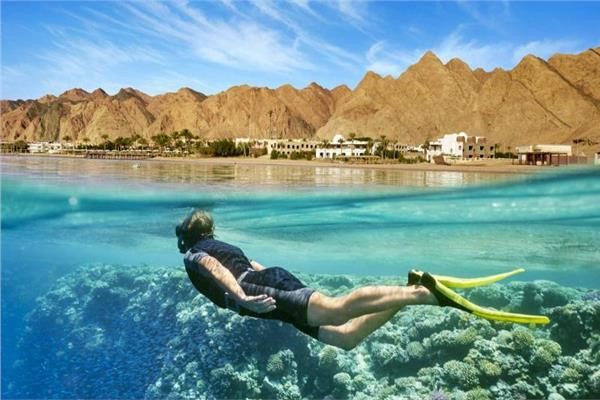 Egypt has two seas, the Mediterranean and the Red Sea, which is famous for snorkeling and a lot of water activities. And we’ve got the western dessert and the Nile river. Leaving all of that aside, today I want to focus on one of my favorite cities in Egypt which is Hurghada.

Hurghada is one of the most popular tourists’ destinations in Egypt, which I was lucky to visit several time and my last visit was with my family in the winter vacation as the best timing to visit Hurghada is winter with its warm weather. We really had a great time there with lots of good memories.

Each year, the region welcomes hundreds of thousands of tourists, both domestic and foreign. Hurghada is located on the coast of the Red Sea. It has that beautiful sandy beaches and the perfect crystal clear waters for diving and snorkeling that everyone enjoys. The following picture can briefly show from the first look at Hurghada from the sky, as I took that picture while we were approaching the airport of Hurghada. 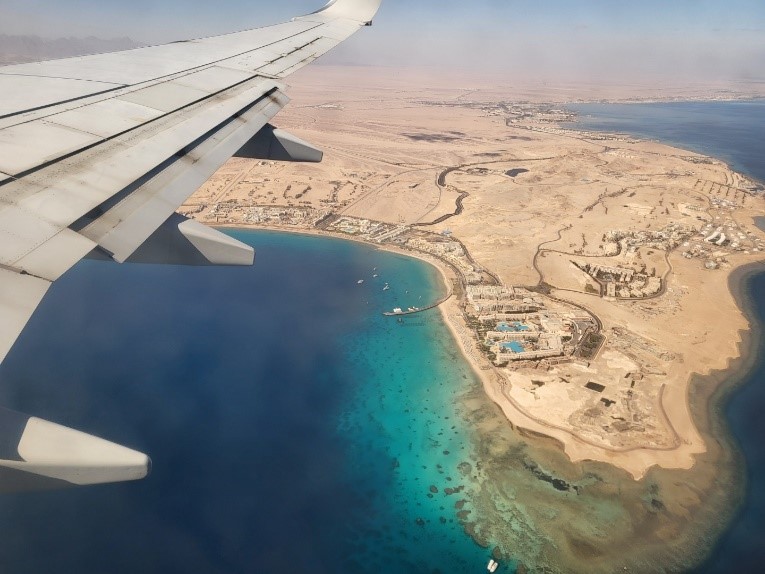 As the city is surrounded by desert, it offers the best setting for dune surfing, desert safaris and camel rides. So there is a lot of fun activities to do in this beautiful city. It is not surprising that it is such a popular holiday destination since it has something for everyone.

A brief background about the history of Hurghada:

Years ago, it was just a small fishing village, which later evolved into what we see now the beautiful city of Hurghada. It was first settled in 1905. And the name acquired from a plant which has grown there naturally since the days of Ancient Egypt. Around 1980 the Egyptian government began to see the potential of the village. Its location was perfect for tourism. So the government started investing massively in Hurghada. And As a result, the fishing village quickly grew into an internationally renowned city. During the reign of King Farouk, a recreational break was built, which was transformed after the nationalization during the era of President Gamal Abdel Nasser into the building of the Armed Forces Water Sports Club, which is a tourist attraction until now. Petroleum was discovered in that region in 1913, and actual production and export of it began in 1921. The English-Egyptian Oil Wells Company Ltd. was one of the first companies that began producing oil in this region. In 1972, the Israeli forces attempted to occupy Shadwan Island, but the Egyptian armed forces confronted them, and were able to defeat and expel them from the island within hours in what is known as the Shadwan Battle, the date on which the Red Sea Governorate celebrates its National Day.

The following picture also from the plane flying over Hurghada shows that it has many resorts with swimming pools and lagoons on the Red sea. 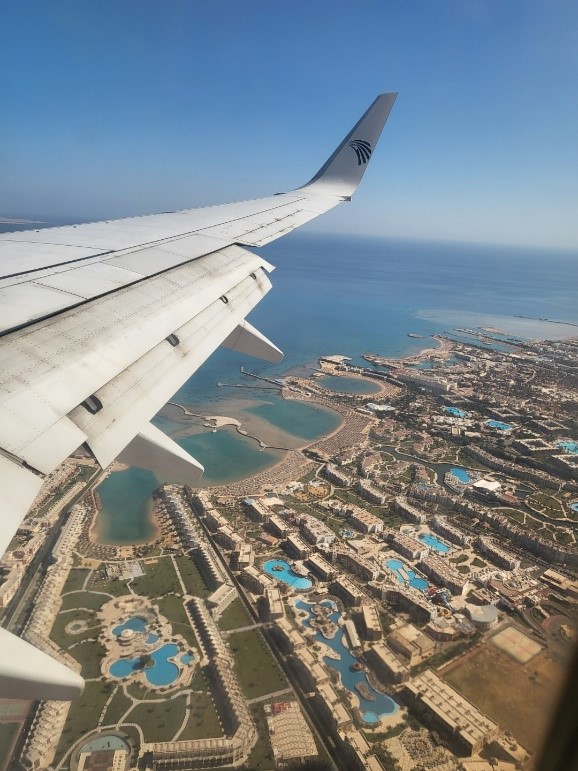 The old city of Hurghada (Al-Dahar) extends in a longitudinal strip, confined between two limestone hills, one in the east between the old city and the coast, and the other in the west. Therefore, the city of Hurghada is located in a coastal plain whose width varies from one region to another, and its width ranges between 8 to 35 km. This shows the multiplicity of patterns in the urban fabric of the city. The spontaneous and networked fabric is concentrated in the nucleus of the city, where urbanization is random, which is characterized by poor and medium-sized buildings, most of which are cohesive, in addition to the narrow and meandering of roads and streets whose width ranges between 3 to 6 meters approximately. As for the networked and ribbon-organized fabric, it prevails in the newly developed urban extensions.

The city covers an area of 40 km of the coastal strip of the Red Sea and is characterized by its bright sun throughout the year and its wonderful coral reefs, in addition to dozens of interesting attractions that tourists go to for relaxation and comfort due to the city's attractions, including the moderate temperature throughout the year, and its desert climate. Dry and including beach fun gear, fun water sports, clubs and golf courses.

And now let me introduce to you my best 2 places to go in Hurghada according to my opinion through my trips there:

Makadi Bay Resort or Makadi Bay joined Hurghada in April 2015. It is located 35 km south of Hurghada city centre. The resort enjoys bright sun throughout the year and stretches of beaches of clear sea water and natural white sand. It is one of the ideal Hurghada resorts for holidays and cruises, where temperatures in the resort range between 15 to 23 degrees Celsius in the winter months, and between 23 degrees to 34 degrees In the summer and spring months. The resort is designed to meet the needs of different tourists, as it includes a group of luxury hotels, restaurants and lounges that serve to provide an international service that includes a selection of Asian, French, Italian and Japanese cuisines. 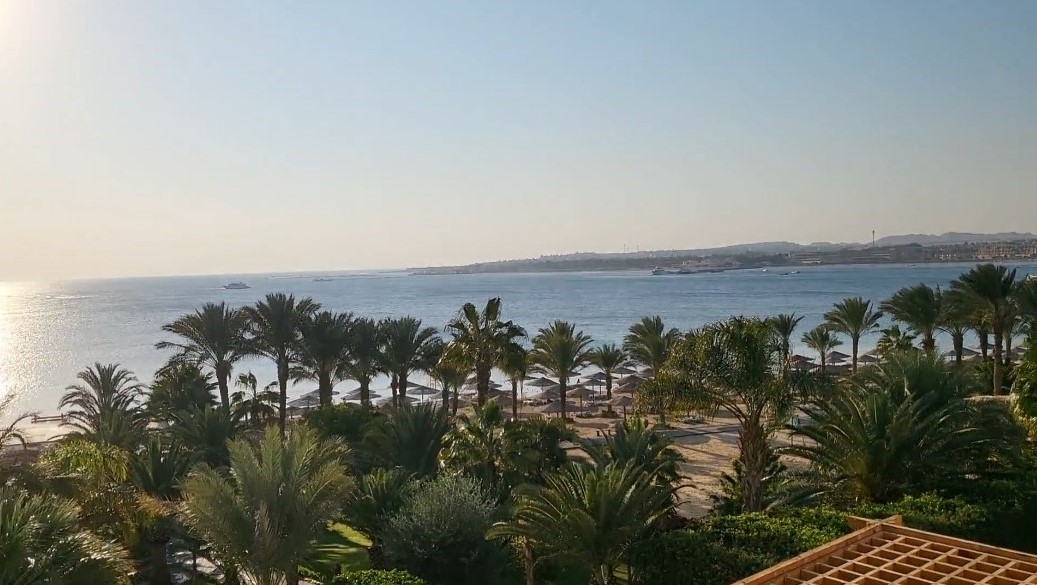 El Gouna was established in 1990, when it was developed by Orascom Hotels and Development on a group of islands as one of the tourist resorts located on the Red Sea coast. It is 22 km from Hurghada International Airport to the north, and 470 km from Cairo. El Gouna tends to achieve food self-sufficiency by relying heavily on the products of El Gouna Farm, which is built on an area of 120 acres, which provides the resort's needs of vegetables, fruits, meat, poultry and fish without the use of pesticides. The area is famous for being a site for diving in the depths and various water sports, and there are two main beaches, “Zaytouna Beach” and “Mangroovy Beach”. The Golf District, the Nubian Quarter, the Plateau District, and the Italian Quarter. 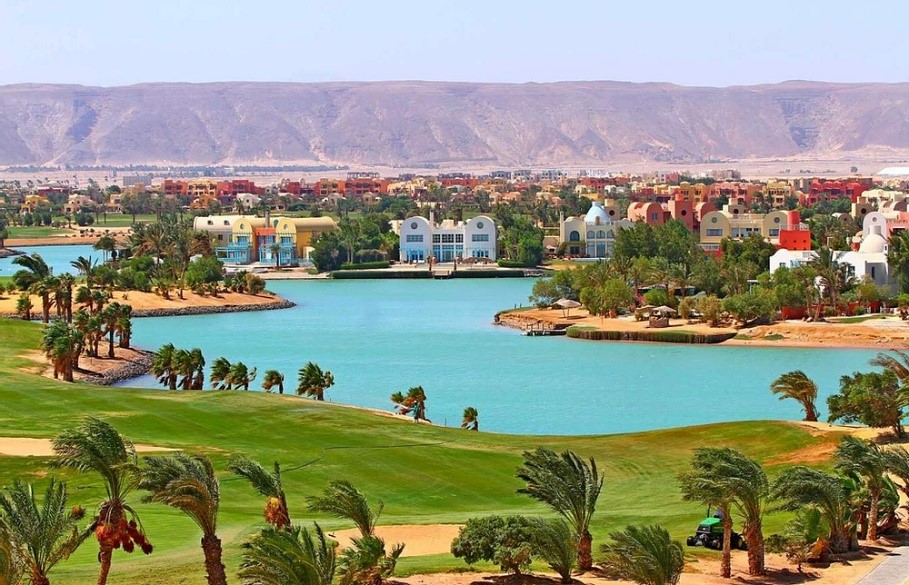 All investments in the resort tend to rely on clean solar energy and completely dispense with government-generated electricity, by storing batteries for energy generated by solar cells. El-Gouna is the ideal resort for practicing golf, diving, water skiing, windsurfing and kiting, and has many health clubs and five-star hotels, as well as beautiful scenery and pleasant weather all year round. Also, El-Gouna is famous of its annual international Film festival inviting famous actors from all over the world.

Let me tell you my experience in Hurghada and the best activities you could experience there. On my last visit to Hurghada with my family we enjoyed snorkeling and swimming in the Red Sea. And I experienced for the first time the submarine. It was a great experience and I highly recommend it. The Sindbad Submarine is the only one in Africa and the Middle East. This means that it’s hard to find such an experience anywhere else. So, if you got the chance to visit Hurghada city, you must try the submarine. 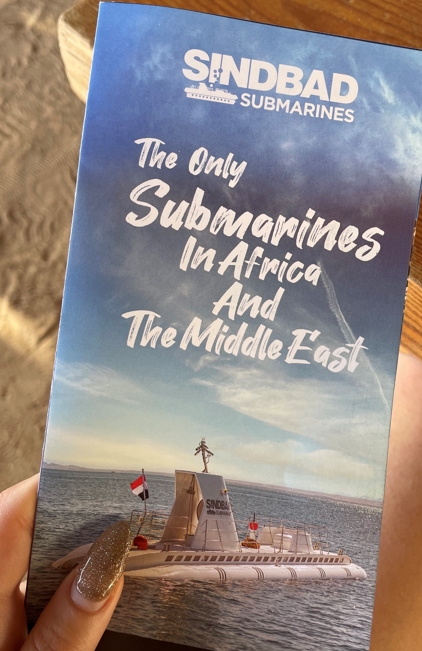 You can see the colorful corals and variety of fishes and amazing scenery under water. I took so many nice videos and pictures. It was an unforgettable underwater adventure and mesmerizing. That’s me in the following picture that was taken for me while I was inside this submarine under the sea. 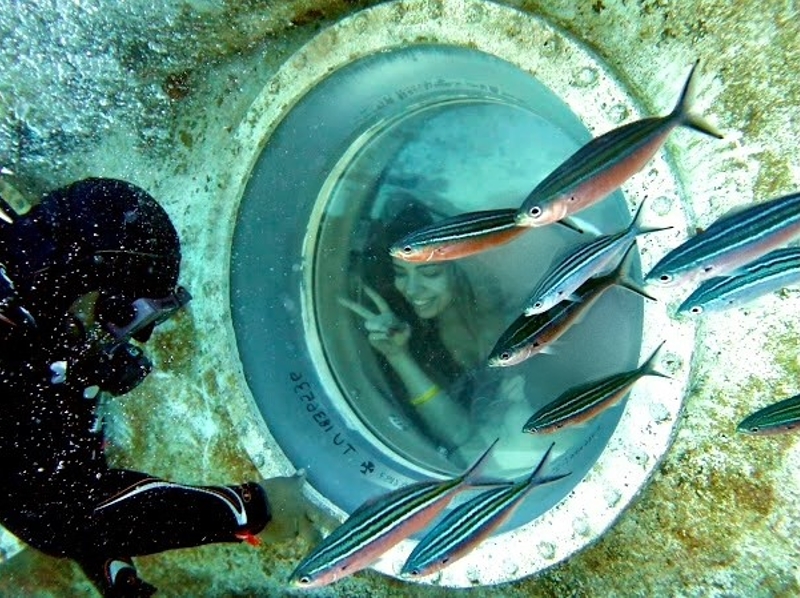 If you’re the type of person who love trying new things, then try learning to windsurf or kitesurf. Whichever activity you sign up for, Hurghada is one of the best locations in the world for beginners. There are so many Windsurf & Kitesurf Centers that you can try a one day class and there’s classes for all levels. It has direct access to shallow waters and, crucially, a standing area on the sandbanks of a small bay, where you learn to balance before taking the plunge. Instructors are professionally accredited, and safety equipment is all present

Also if you’re looking for a safari adventure Hurghada is the place for you.  As I mentioned earlier, Hurghada is surrounded by desert so there are many activities that you can try. There you can try a lot of activities such as riding camels, drive Buggy car, camel riding, going on a distinguished motorcycle tour and touring the Bedouin village. And before the sunset you can watch closely the view of the sunset moment by moment in a clear sky, and enjoy a luxurious dinner in the delicious Bedouin way with fresh drinks, and watch the most beautiful shows Artistic and famous Bedouin folklore.

You don’t want to miss this experience. It is a real paradise for divers and snorkelers. As you may know, the Red Sea is considered to be one of the 7 wonders of the underwater world with more than 1000 species of invertebrates, 1100 species of fish and 200 species of soft and hard corals. 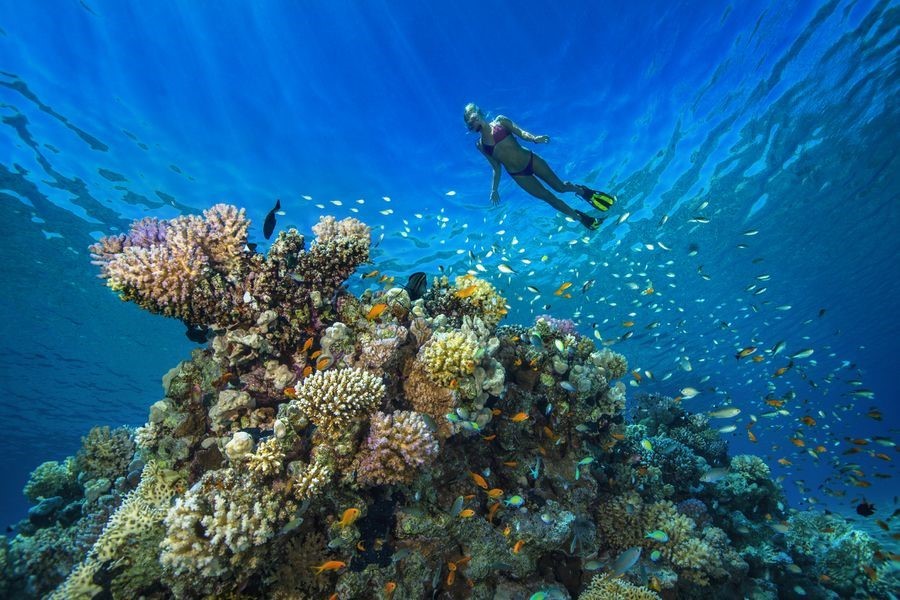 As you see Hurghada is one of the most beautiful cities in Egypt with many activities to enjoy with your family and friends. I mentioned just some of the activities but there are actually more activities as well. Also I’m sure you will enjoy the seafood there as Hurghada is famous for the variety and delicious seafood cuisine. I hope this article helps you getting to know more about this beautiful city and if you get the chance to visit Hurghada, I hope you enjoy your time there make the best memories.